This page has been put together to give you some ideas on how to conduct research into your roots. The suggestions contained here are simple ideas that have worked for me–some of them may not be helpful for you, as all of us develop our preferences for the way we work. Use those you find helpful.

Determine how you’re going to record the result of you research. In most cases, this is a matter of deciding which software to use, and again, this is a matter of preference. I used Family Tree Maker for while and I also have been using Lagacy I like both of them. I find it useful to use a word processor–but of course I am a perfectionist, such as WordPerfect or Word, to make additional notes, such as a listing of records to search for next time I visit the Library or any of my “Foot” research (which I will talk about later). Many times you will find yourself gathering information that doesn’t relate to a particular person, but rather fills in background information for a geographic area or a group of people-this sort of information is easiest tracked in a word processor. If it is easier for you to use a pad of paper then use that. I sometimes use legal-paper when I do “Foot” research. I then use this format: First, the keyword; such as a surname, place, etc. Second, the Source; e-mail address, reference citation, etc. Third, the Note; the data itself. I can’t say it enough…MAKE SURE YOU SOURCE EVERYTHING!

Start With What You Know

Enter, either into your genealogy program or by hand, all of the information that you have from personal knowledge of your family history. Wherever possible, make not of where events took place, as geographical data plays a very large part in tracking down ancestral information. Document your sources thoroughly, even if your data comes from your personal knowledge! When you’ve exhausted your own knowledge, move onto you family members. A Tape recorder is often a useful tool, particularly when “interviewing” the older family members–*small note, some older family members do not like to be taped. Try not to make your question too vague, a more specific question (i.e.: “Do you remember Uncle George and his wife Aunt Bertha?”, etc.) usually returns a better answer with more information. Keep in mind that some of what you hear from your family members may be more along the line of ‘Family Legend’ rather than actual fact, but even such legends may provide clues to further avenues of research. Do not discard, out of hand, ANY information you gather.

Family Bibles are usually the most informative of heirlooms, there are others which may provide a wealth of information as well. Old history books, particularly local histories, may include notes in the margins indicating a relationship to a family member. photo albums are often invaluable, especially if names are included. One of my own treasures is a stack of papers found in my great-great grandmother’s bible. One of the papers was an obituary of her brothers, giving me an additional family member to add to my research.

Probably the best available for resources exists in your local Library. They have extensive collections of microfilm and microfiche copies of historical and genealogical data from all over your area and around the United States. Local libraries have census records, local newspapers, pre-compiled genealogies and other compiled genealogy related material. Most local libraries have a “GENEALOGY” section, where they might have a surname index, or genealogies already compiled with researchers name and address or phone number. You will come to a point in your research that you don’t know what to do next, you might want to check out your State’s State Library. Each State has a Library that covers the whole state. Research that can be found there are: Pre-compiled genealogies, census records, newspapers, ships index, birth, marriage, and death indexes and much more genealogy related material. The only differences between the local and State library is that the State covers the whole state.

OK, you’ve put together everything you know so far. Now What? Now it is time for my favorite part of the research “FOOT” Research. The “foot” research includes: Funeral Homes, County Courthouses, Churches, and Cemeteries (and sometimes the occasional Family Reunion).

Funeral Homes provide material such as Death Certificates and much more. I have recently gotten my grandmother’s sister’s death certificate from the local funeral home, it gave me her birth, death, what she died of, who her parents were, when her funeral was, where she was buried and that her middle name was “Arla” NOT “Arlene.”
County Courthouses sometimes limit the use of there material so call ahead. I couldn’t find my great grandfather’s death in the index, I had an obituary, but couldn’t find it anywhere in the death index. I went to the courthouse and look through the year, and guess what?…There it was!!

She married Lyman Andrew Wilkinson on June 12, 1929, in South Bend, Indiana, when she was 40 years old.  Lurena M. “Rena” Tyrrell and Lyman Andrew Wilkinson were divorced on December 4, 1937, in Kalamazoo, Michigan, after 8 years of marriage, no children from this marriage.  She then married Fredric Lee Snook on April 19, 1940, in Kalamazoo, Michigan, when she was 51 years old.  Sometime either before Fred or after, she also married W. D. Cook “Woody.” 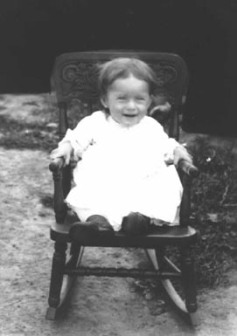 Lurena as a baby 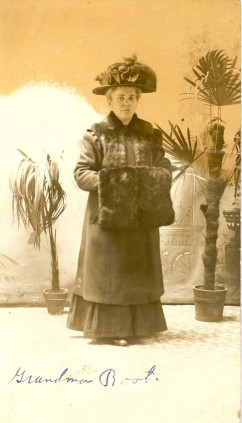 While researching my husband genealogy, I found a French connection.  I’m new to French Research, so some of it seems very different to me.  The French language is scary!! Wish I would have paid more attention in French class!! I’ve got it from Wisconsin > Quebec, Canada > France (that’s where the name changes!) The name Londo changes to Languedoc in Quebec, then in France to Cazalet Languedoc to Cazalet de Languedoc to Cazalet. And they lived in Montpellier, Languedoc-Roussillon, France…. gasp!!

When Julia Philomena Londo was born on June 4, 1863, in Ahnapee, Wisconsin, her father, Alfrederick, was 29 and her mother, Philemon, was 29. She married, Charles Harrison Root, on July 24, 1880, in Jacksonport, Wisconsin. They had 14 children. She died on October 4, 1919, in Cadillac, Michigan, at the age of 56, and was buried in Calvary Cemetery, Flint, Michigan.

When Alfrederick “Frederick” Alderick Londo was born on February 2, 1834, his father, Antoine, was 32 and his mother, Almira, was 20. He married Philemon Burbey on July 4, 1855, in Manitowoc County, Wisconsin. They had 19 children in 27 years. He died on May 22, 1928, in Allouez, Wisconsin, at the age of 94, and was buried in Wausaukee Evergreen Cemetery, Wausaukee, Marinette , Wisconsin.

Antoine Joseph a Londo Languedoc was born on August 3, 1801, in Quebec City, Quebec to Anne Madeleine Pinard, age 19, and Joseph Antoine Cajolet de Languedoc, age 21.  Antoine married Josette Lamirande on February 6, 1827, in Baie-du-Febvre, Quebec, Canada and they had 4 children.  He then married Elmira/Almira Champeau and they had 12 children together. He died on August 4, 1852, in Brown County, Wisconsin.

Joseph Antoine Cajolet de Languedoc was born in 1780 in Quebec, Quebec, Canada to Marie Francoise Faucher Chateauvert, age 43, and Jean Baptiste Cazelet de Languedoc. He married Anne Madeleine Pinard on February 8, 1790 (I’m not sure if this is a right date, because that would make Joseph 10 years old. So either his birth date or marriage date is wrong).  Joseph died on April 18, 1835, in Vaudreuil, Quebec, when he was 55 years old.

This is also where I start to find a lot of French connection, and the change in the names. Francois Cazalet from Montpellier, Languedoc, France is Joseph Antoine Cajolet de Languedoc‘s 2nd great grandfather & my husband’s 9th great grandfather.